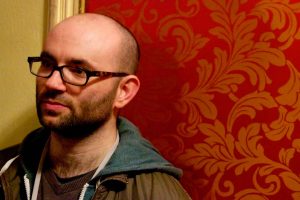 Robert Greene’s latest film Bisbee ’17 (screening 11/3 at 7:30 p.m.) premiered at the 2018 Sundance Film Festival. His previous film Kate Plays Christine (2016) won a Jury Award for Writing at Sundance 2016. Robert’s documentaries include the Gotham Awards-nominated Actress (2014), Fake It So Real (2011) and the Gotham Awards-nominated Kati with an I (2010). Robert was an inaugural Sundance Art of Nonfiction fellow in 2015 and is a two-time nominee for Best Director at the Cinema Eye Honors. The Independent named Robert one of their 10 Filmmakers to Watch in 2014 and he received the 2014 Vanguard Artist Award from the San Francisco DocFest. His first documentary, Owning the Weather (2009), was screened at the COP15 Climate Change Conference in Copenhagen. Robert has edited over a dozen features. He has been a Sundance Edit Lab Advisor and was on the U.S. Documentary Jury for Sundance 2017. Robert writes for outlets such as Sight & Sound and serves as the Filmmaker-in-Chief for the Murray Center for Documentary Journalism at the University of Missouri, where he teaches and co-programs the Based on a True Story Conference, which runs in conjunction with the True/False Film Festival.